Baxter and a story about what horses really have to offer 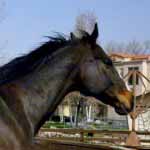 We think all of our horses are awesome, but we confess, we are biased, but we’ll let you be the judge…

Baxter, our great big Thoroughbred has had some lameness issues lately. The Thoroughbred breed is infamous for having “bad feet” and as an ex-race horse (he won over $300,000 on the track!) he was used pretty hard as a youngster. 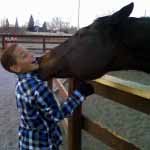 However, he was doing better this week so we allowed some of our clients to work with him…

After learning that Baxter was one of only two horses who actually liked playing in the sprinklers, DK decided that he wanted to work with Baxter. DK is aware that Baxter has been “off” and states, “I’ll walk him slow so I don’t hurt his feet.”

The good news is, Baxter seems to be moving fine. DK continues to be very empathetic, “I don’t want to hurt him.” DK has a good ride on Baxter, trying out various obstacles and learning about using his 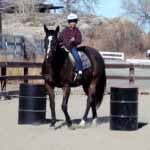 legs more effectively while he rides.

Baxter is doing so well that Bambi decides DK can do a little work at the trot. DK has several successful short trots before heading over a series of ground poles. 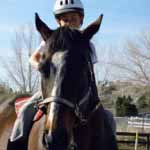 As DK trots over the poles he becomes a little unbalanced as he is pulling the reins back to stop Baxter. It looks like slow motion, as the horse is actually coming to a stop, DK slides to the side and falls to the ground. DK jumps up quickly, looking a bit distressed, but not overly upset. Bambi walks over and quietly tells him he is OK, that he just lost his balance and came off.  DK acknowledges that he did lose his balance. While Bambi inspects the small strawberry scrap on his arm axter walks over to the client and puts his head down to 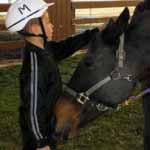 DK. Bambi shares that his horse is telling him he is sorry and is wondering if DK is OK.  DK reaches out and rubs the horse’s nose, saying, “Yes, Baxter, I’m OK.”

DK doesn’t hesitate when asked to get back up on Baxter. While Bambi is lining Baxter up at the mounting block, Baxter again puts his head down into the DK’s chest, seeming to tell the DK he’s sorry. DK acknowledges this by rubbing Baxter’s head. 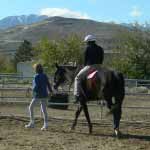 Bambi leads DK around the arena on Baxter leads around the arena and then has DK dismount. As DK leads Baxter back to the grooming area Bambi checks in to see how he is feeling. DK states  “I’m fine.  It wasn’t even Baxter’s fault.”  Bambi agrees and DK continues “Yeah, it didn’t even hurt very much – my arm just 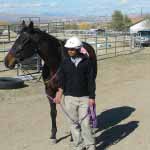 stung a little bit.”  Bambi praises DK for jumping up so quickly, “you have good instincts, in a different situation, perhaps where a horse was being naughty, getting up quickly and getting out of the way could save you from getting stepped on.”   DK accepts this praise, “I know,” takes his Baxter’s reins and leads over to untack him.

While DK is untacking him and brushing him, 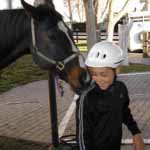 Baxter repeatedly puts his head down to the DK’s chest – clearly demonstrating his concern for DK’s welfare.  DK is moved by this continued attention, telling his Bambi, “Baxter is really worried about me.”  Bambi agrees, “Baxter really wants to make sure he is OK and wants you to know he is sorry you fell off.”  DK again tells Baxter, “It’s Ok Baxter – I’m fine.  You were a good boy.” 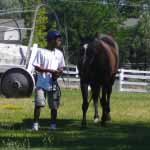 As session is ending DK leads Baxter  to the small run-out arena, removes Baxter’s halter and turns to walk away. Baxter follows DK back to the gate, puts his head over and drops it down to the DK’s chest again.  DK bends forward, kisses Baxter’s nose,  pets him and tells him one last time, “It’s OK Baxter – I’m fine and you were a good boy.”

AND IN FACT HE WAS AN INCREDIBLE BOY! This is a memory that DK will carry with him as he goes out into the world. A memory of how a horse cared so very deeply about his well being. Awwww, the magic of horses!