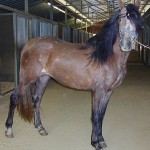 Kody (yes, Kody started life as a ‘Bay’ horse!) didn’t always look like he was good therapy horse material. He had been used as a means to an end, kind of a tool used to get a certain job done, rather than as a partner.

When I got him he had a fancy Spanish name that seemed to have nothing to do with who he is.

It took me 3 months to discover his name. It happened one day when I was giving him a bath and realized that he was so fuzzy, just like a bear…and Kodiak Dancer (every horse should have a fancy name) aka “Kody” was born.

Kody came to me pretty insecure. If you don’t ever think for yourself, you don’t become very confident. The first year I had him I was the only one who worked with Kody and slowly his confidence grew.

Today, many years later, Kody is proving to be an exceptional therapy horse. 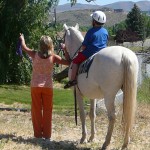 He is a prince and we are so very luck to have him as part of our team!  Here’s to you Kody!!